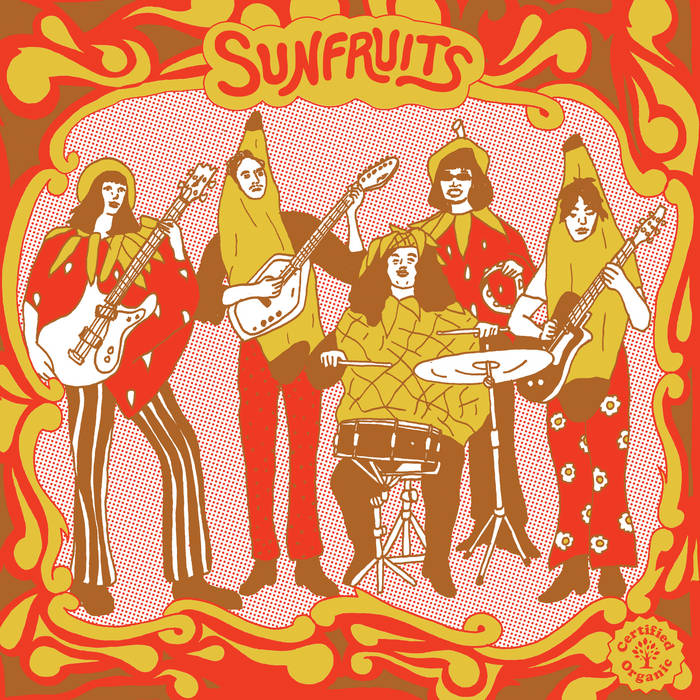 Fresh off the back of releasing their Split 7" in 2019, Melbourne's psych poppers SUNFRUITS have wasted no time in their home studio !
We are pleased to announce the band’s upcoming debut EP, to be released on Feb 11.
Commonly released with our Australian label friend Third Eye Stimuli.
Check their Bandcamp below :
thirdeyestimuli.bandcamp.com

Suitably entitled ‘Certified Organic’, the EP contains 6 tracks that epitomise the Sunfruits’ groovy free-form approach to song writing. The collection of tracks are both playful and serious, luring you in with infectious rhythms and melodies, while sitting you down for a deeper conversation concerning environmental collapse, social uprising and the willingness to change.

Sunfruits revive the 60s psychedelic sounds with their very own garage-pop spin, blending their own wonky twist of modern disco beats and Tropicalia inspired freak outs. The EP will please the ears of fans of Khruangbin, Nice Biscuit, Babe Rainbow, Bananagun and other psychedelic purveyors.

While the band is new to some, the members have been kicking around the Melbourne music scene for some time. Founded by Winter McQuinn (IV League, Culte, Cracker La Touf), their members include Acacia Coates (Pinch Points, Slush) Shelby De Fazio (Bad Bangs), Gene Argiro (Stella Bridie, Bluey) and Evie Vlah (Jungle Cuffs).

Released across the pond by Third Eye Stimuli in AUS, and Six Tonnes De Chair Records in EU.