This Lake Is Pointless 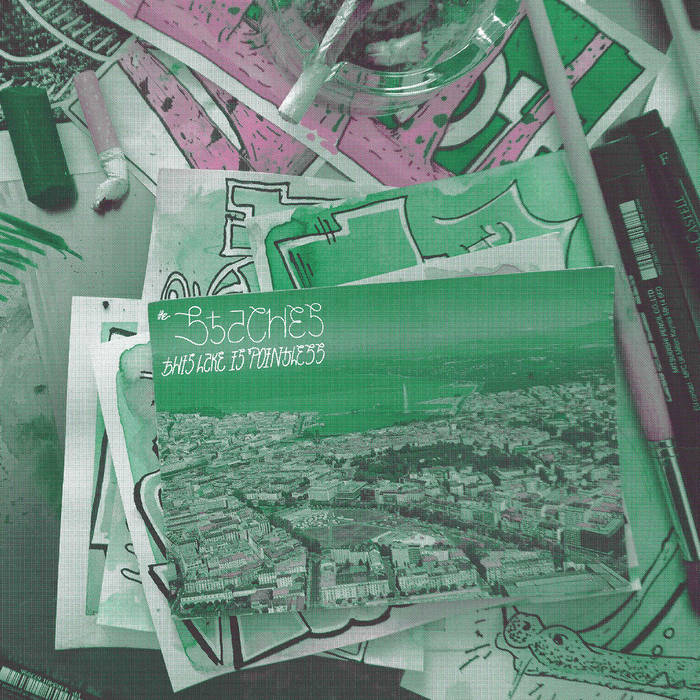 vyevyemusic love this geneva band. they have their own identity, you could recognize their music among 1001 others. Love the energy and their sense of humour. Favorite track: Hyper Punk.

The Staches
This Lake Is Pointless


„This Lake Is Pointless“ a statement made by Mr. Anton Garber boywonder of the Modern Talking of our time - PUFF ,
regarding a puddle in the countryside of Bourgogne / France during the beautiful festival of Cour Denis.

The title of this third studio album, which The Staches recorded on their own with a Tascam - 4track and a computer,
in their chosen home of Leipzig / Germany also refers to their original home - the city of Géneve, it’s beautiful lake
and pathetic fountain. The fact that they left these comforting, clean streets of their wealthy home to fully dedicate their carcasses to play and record a very own brand of emotionally challenging synth guitar „Rockmusic“ also leads me to
alternatively (and more accurately) name this record: „ Tales Of Exile And Isolation“.
I mean you can really hear them going out of their minds zoning stoned during a nasty winternight recording just
to see the sun arise to an equally dark and grey day. Sounds depressing? Yes! But this record is everything but depressing because it has a very forgiving, conciliatory quality that I am looking for in a lot of music.
Speaking of depression - the opener The Great Depression is just as bold as a Pernod on ice splashed right into your face (by your fav. bartender), the first words „The great depression - EmotionaI competition“ (followed by a german „Eins Zwei Drei Vier“ that in it’s bored dumbness reflects perfectly how annoyed you can get by the language that you are supposed to learn after living for some time in your new home ) sung with that not hidden at all french accent always kills me right away. Followed by the laid back, groovy Burger King - drive - thru hymn Fake Stomach Ache, which features deliciously dry drums a thick leading bassline accompanied by a toyish sounding synth and a nice flat sounding Marchand ( yes that is someone of the band ) signature guitar. Again great lyrics and multiple voices adding up to the general theme of desperation and winter loneliness. A single great line sums up the whole phenomenon of Neo -Hippie - Techno - MDMA bullshit that you can refer to immediately if you have ever been at a club, an afterhour or just happen to live in a big ,hip ( german ) city „Living in the work zone, feeling low, living the same day, every day, the same day after a night of drugs and no idea of who or what to blame“. I could read a big deal of criticizing modern society and yourself as part of it in all of this, but it’s never delivered in a dogmatic way and not too hidden as well, which is not easy to achieve.
Thank God For Mc Donald’s is a very good title and a very good song indeed. Surprised to learn that these fellow Switzerlanders never got introduced properly to Sonic Youth I still tend to find a lot of their momentum in the Staches’ compositions. Especially in the closing instrumental intro of Hummus, a stoic and acceptingly told story of a date that almost didn’t happen „ Sitting at the table and I know she won’t arrive - The dish is cold and I am almost out of fries“ sung with a little accent that I’d file under fake - british - punk, but doesn’t annoy. As you may have already realized you made it till the namedropping part of this review and I cannot let you get through it before mentioning Parquet Courts and Mastodon, decide for yourself. But you can def. hear how they are influenced by a lot of australian stuff as the likes of Hierophants or UV Race ( there is even a song called VW race, and the last record was mastered by Mickey Young - ok, yes this guy is mastering EVERYTHING, but this is still cool! ) and equally electronically enhanced 80s german Wave, No Wave or New Wave music. The band is probably almost as annoyed by these comparisons as by being referred and thereby reduced to a female act, girl punk or feminist outfit ( I will officially refer to them as Male Punk here so this probably won’t make it to the final version).

Especially enjoyable are all the little things going on before after or inbetween the songs and the ironic touch towards handling the own persona - see Money In My Veins dealing with the curse and blessing of coming from one of the richest countries in the world. This record for sure doesn’t wear off fast, it rather grows and doesn’t get boring, especially the depths of dealing with undealt emotions and the obligatory heartbreak make this really interesting and referable especially after a couple of times listening to it. „Allrighty dudskies, en voiture Simone and to Victory Middlesbrough!“

The Staches is a 10-year relationship. They are not a couple, nor two couples, neither a ‘’quadrouple’’, but do love each other, and do fight sometimes. Becoming masters and mistresses in the art of managing the goat and the cabbage, they create together songs, or tricky strategies challenging any tags or boxes. Driven by the fear of the Undefined, some have tried to describe their music and confused themselves with designations like punk, post-punk, lo-fi pop, prog rock, garage and lost themselves even more with comparisons with any rock band including at least one woman. Fool that they are. Who the fuck cares. These young dinguses are fun to listen to and fun to watch. Punkt.
The Staches are from Geneva, Switzerland, and for obvious reasons, they are now based in Leipzig, Germany. Their upcoming LP « This Lake is Pointless » will be released in March 2019 on Les Disques Bongo Joe (CH), self-recorded at home in their beloved « Proberaum », late at night, when even the toughest metalheads next door are asleep.