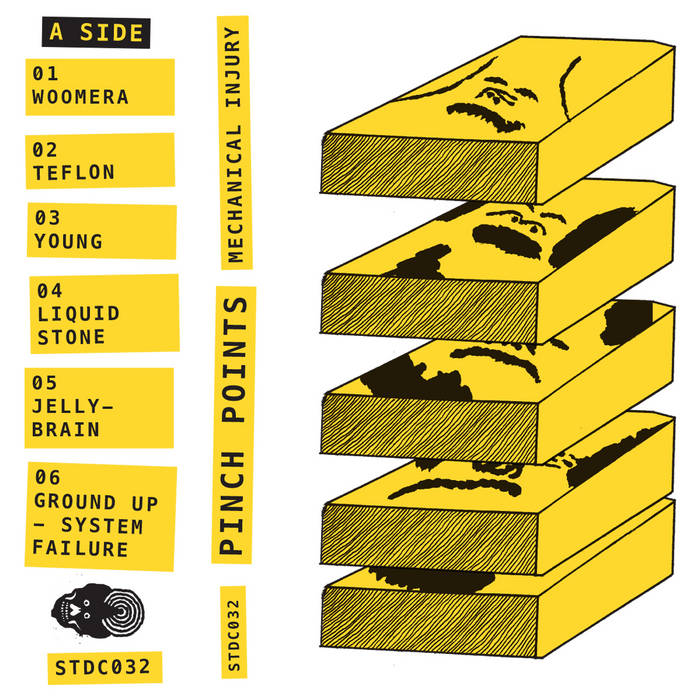 ☆R●gR4f☆ i like to have this on at parties and grab random strangers trying to get laid....works evry times ♡♡♡♡♡♡ Favorite track: Woomera.

nietenkaiser For friends of the Uranium Club. Better being a brilliant copy than reinventing the wheel. Love it! Favorite track: Jelly Brain.

skully barnes Pretty hard to be in a bad mood with this album in your ears Favorite track: Young.

‘On the utterly infectious Mechanical Injury, Melbourne’s Pinch Points blend the best elements of early Wire, The Fall, and Kleenex into a barbed-wire coil of sound that’s as loose and springy as it is dangerously serrated. Familiar elements abound—the warring spoken/sung male/female vocals, the obtuse-angle guitar lines—but it’s been years since they’ve been combined in a way that has felt as nervy and fresh as they do here. There’s a sense of anxious energy coursing through the tracks—like a band running at top speed to stay ahead of a bridge that’s collapsing beneath their feet. Take album standout “Jellybrain”: a few breathless apostrophes of guitar, some quick, slashing riffs, and then belted-out lyrics about the deadening effects of TV, all of them hurtling desperately toward the finish line. On “Teflon,” a guitar line flits and spasms over a rock-steady drum line, and on the manic closer “Ground Up – System Failure,” they stretch a single hiccupping riff across to the breaking point, fully collapsing at the one-minute-thirty mark before pulling out of the lurch and starting the cycle up again. What comes across on Injury more than anything is a pure, unfiltered sense of joy; make no mistake: the machine that’s causing the titular injuries is capitalism, and the band is far from thrilled about it. But they’ve found a way to merge protest music with party music—think “Rock Lobster,” if it were about overthrowing the government. Pinch Points put the “riot” back in “riotous.’
Joseph Keyes - Bandcamp

Pinch Points writes, rehearses, performs and records it’s music primarily in Naarm - Melbourne, on the lands of the Wurundjeri, people of the Kulin Nation.
Indigenous sovereignty has never been ceded to the current « Australian » state, which will remain an occupying force and illegitimate state until sovereignty is acknowledged and treaty signed.